I am not the first person to imagine that U-Haul’s tagline, “Adventure in Moving”TM is quite possibly the loudest misfire in American branding. But I bring it up here because I am in the midst of moving, myself, and I could use a chuckle about now.

I hate moving. Adventures or no (and I much prefer NO), moving simply sucks. And I speak with some authority on this question. I have moved twice a year every year since September, 2003. All that’s going to come to a feathered edge pretty soon, though, because I just bought myself a place that I will not have to move out of. I am DONE with landlords, DONE with leases, DONE with not-doing what I want to do with the space I live in 9 months of the year.

I’m part way there. It will be a couple more weeks before I can move into my new digs (right). And I still have a week to go until the movers show up at my old place, so I am packing stuff and pitching stuff and trying to keep the cats from being taped into the boxes I bought at … U-Haul. Whenever the center of the livingroom becomes so heaped with cartons that I can’t keep an eye on the fuzzy kitty across the way at the edge of the kitchen sink, I put a bunch of things in my little car and drive them to a self-store place in my new town. I will stash my stuff there until I decide what I want to take into my new place. 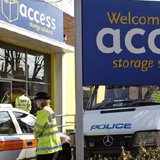 I personally will never go into the self-storage trade; I know this.  I would worry too much; I would worry that the sketchy guy in the rusty Buick wasn’t really stowing his “summer picnic stuff” in those two big RubbermaidTM tubs wrapped in electrical tape.  Come to think of it, it’s been months since he’s been around…  No, the management of a self-store locker establishment is not my calling. But I am very grateful to the nice lady who does manage such an establishment not three miles from my new abode.

One thought on “What moves me”