Watched Beijing with the fam last night. And was seduced, like most I imagine, by the spectacle of the Opening Ceremony, the genuine exuberance and the evident pride of the Chinese. I had blasphemous thoughts: that the poverty, the oppression, and even the emblematic domination of Tibet were all — for a nanosecond — beside the point. Even for the poor. Even for the oppressed. Even for the real Tibetans.

Some 90,000 comprised an international audience who watched from the stands, and a billion more tuned in on TV to watch 16,000 performers — mostly from the Peoples’ Liberation Army Song and Dance Troops — enact the epic tale of China, on and over the floor of the “bird’s nest” National Stadium, which was spread with a huge LED screen (500 feet long) that at times performed as a giant scroll.

We are so different, the Chinese and us. Aren’t we? Take the simple matter of written expression. Every school-child knows that Chinese is a pictographic script. In the Chinese language, we are reminded, there is no alphabet as we know it. And so there is no “alphabetical order.” Last night’s “parade of nations” was sequenced by the number of strokes it takes to write the country name in Chinese. The fewer the strokes, the farther up front you may march. Does this seem arbitrary? Our system is more so. What puts “A” in front “B?” Do they put a premium on brevity? This is either a profound difference between us, or none at all.

Other things I learned, relearned or was reminded of: This is a nation whose age is counted in millenia. This is a nation older than the idea of “nation,” even. And a nation of fractious antiquity — of uncountably numerous, quarrelsome fiefdoms, scattered over vast terrain and eons of history. You can see how they came to prize social harmony. Confucius made his living (not to mention his after-life) wandering among the warlords, dispensing advice on how to live well in fellowship.

These thousands upon thousands, working together in perfect synchrony, were mesmerizing. 2,008 drummers opened the spectacle, flailing on their illuminated drums, perfectly synchronized, and created patterns — even recognizeable charcters in Chinese. The sound was massive — unspeakably large. The bird’s nest stadium resounded with their pounding. The drummers were also dancers. They shouted, and gestured large, in unison.

Similarly, the moveable type blocks — thousands of them — rippled and formed and dissolved and re-formed changing imagery with mechanical precision. I really thought this was computer generated; how could it not be? 2,008 boxes representing type blocks, rising and falling — again, in synchrony? Popping up suddenly in the shape of the Chinese character for “harmony?” Perfect and crisp, then fluid again: waves, concentric circles rushing outward from a disturbance at the center of the field — it had to be computer directed! I thought. 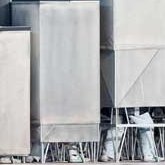 I was so suprised when the Chinese letter-press blocks turned out to be driven by people, in such a complex and lengthy dance, rising to one of three or four specific heights, then squatting, and pushing out plum boughs — standing and waving suddenly at the end. With HUGE smiles — HUGE! Look at us! they said to me. Look at what’s possible!

The collective effect verged on the oppressive; how could we watch these synchronized thousands in lockstep, or the goose-stepping color guard, and not think of the sinister power of anonymous crowds? And yet, the image that kept recurring to my mind was not the crush of tanks in Tiananmen Square, but the human heart: its tens of thousands of cells, in synchrony pulsing, pumping, producing something worthwhile that is only within the power of collective action. 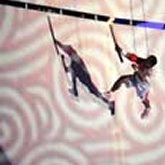 And in the end, what was the “final word?” One. An individual. Doing an impossible thing. Running the rim of the stadium, at some advanced age, high above the ground, no longer earth-bound. Running with the torch, in the air, against the scrim that rings the rim of the bird’s nest. On which, projected, another scroll unfurled. Trailing behind this person was a video montage of the torch-run all around the world, to this place at this time.

The shadow he cast upon the scrim was, at times, larger than his own form. The shadow, too, was running, around the rim, at that great height, but weightless. In the end, the final word seemed to be, the collective is in service ultimately to this, and dependent upon this — the individual spirit. And, conversely, the spirit is magnified in service to the collective. The last human thing we saw: an individual.

Out of many, one, seemed to be the theme last night. E pluribus, unum. I know I have heard that before.